Measure the Impact of Your Campaigns with Lift Analysis

What is lift analysis and why should you use it?

Lift analysis is a measurement of how a Campaign impacts specific key metrics like deal velocity, conversion rate, or average deal size. When it comes to multi-touch attribution, a marketing lift analysis can be applied by looking at Opportunities that were influenced by your Campaign (i.e., your treatment group) and comparing that with Opportunities that were not influenced by your Campaign (i.e., your control group).

By comparing your treatment group against your control group, you can see the “lift” in each of the metrics mentioned above and make data-driven decisions about which Campaigns to invest in or which Campaigns to stop investing in.

Note: It’s worth mentioning that because you are looking at existing Opportunities and the Campaigns you might be measuring weren’t purposely applied to your treatment group and purposely not applied to your control group, the results are less accurate than if you were doing a real a/b test (e.g., where treatment group and control group are equal). However, this type of marketing lift analysis is still useful, just be aware of flaws in your data like small sample sizes that might bias your results.

Let’s take a look at an example…

Example: What impact did my marketing campaign have on deal velocity?

Let’s say our marketing team has been hard at work developing a late-stage nurturing program in Salesforce in an attempt to increase deal velocity. Our program has been running for the last few months and we want to check in on whether this program has helped reach our intended goal of quicker deals. 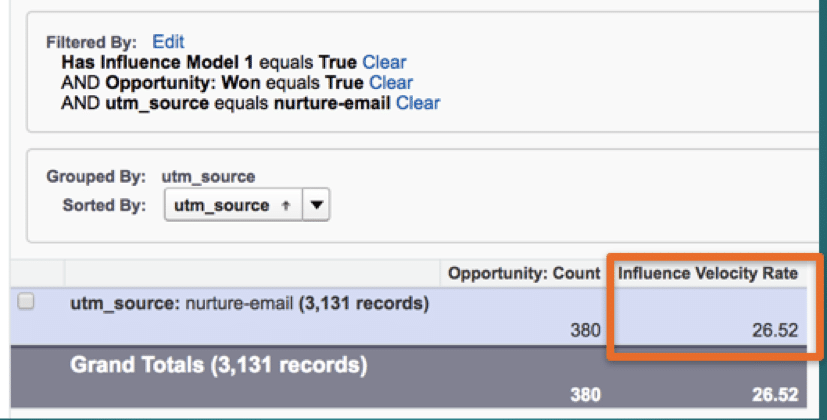 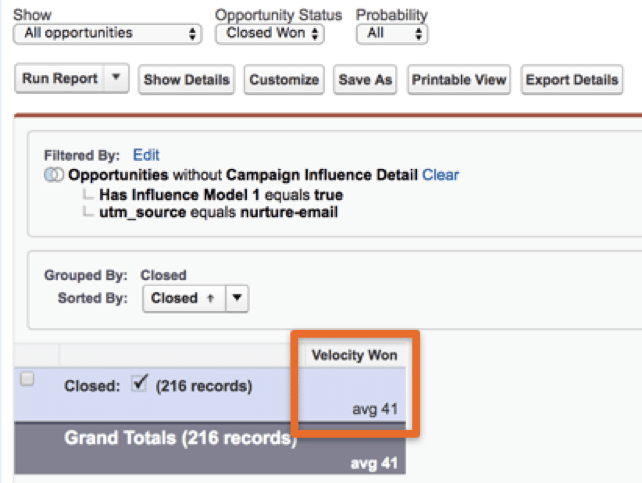 Here we see that the average deal velocity is 41 days, an average of 14.48 days longer than deals that were influenced by our late-stage nurturing program. That’s a pretty significant increase. I think we can call from our marketing lift analysis that our nurturing program a success!

Join us as we use Campaign Attribution data to determine your marketing touchpoints and their revenue contributions all while optimizing your campaign mix.