American statesman Daniel Patrick Moynihan once famously said that people are entitled to their own opinions, but not their own facts.

That sentiment seems almost quaint in these highly polarized times. A 2016 report on journalism and the media by the Pew Research Center found that 88 percent of Americans are concerned that “fake news” is sowing confusion about basic facts.

The Pew report also notes that while people are confident about their own ability to detect fake news, about a quarter of respondents admitted to spreading false stories themselves.

One serious problem is that people tend to believe articles and news stories that tell them what they want to hear. This credulity bypasses their critical thinking skills and creates an echo chamber.

A fragmented media environment contributes to this problem because now it is possible for people to choose media outlets that feed their own biases back to them as fact, regardless of the underlying truth of the situation.

It’s not just a political problem either — something similar occurs in marketing and sales organizations, and companies that want to succeed in an insights-driven economy have to fix it.

In today’s economy, data is the source of truth from which businesses derive the insights that fuel innovation, improve the customer experience and drive revenue. But what if no one can agree on which dataset is true? What if people in marketing are working with a different set of numbers than their counterparts on the sales team?

Unfortunately, that is the case now at many organizations worldwide, especially in the B2B space.

It’s not surprising since marketing and sales teams use different core technology stacks, with marketing teams relying on a diverse set of martech solutions and sales teams using CRM platforms like Salesforce as their go-to data repository and sales technology toolkit. This results in siloed data and a loss of credibility as boards perceive a fake news effect from competing claims about what the data shows.

The divide is getting worse. According to a “State of Sales & Marketing Alignment in 2018” report produced by InsideView, 43 percent of survey respondents from B2B marketing and sales organizations identified “lack of accurate/shared data on target accounts and prospects” as their top alignment challenge, with that concern tying for first place with communication issues.

According to a “State of Sales & Marketing Alignment in 2018” report produced by InsideView, 43 percent of survey respondents from B2B marketing and sales organizations identified “lack of accurate/shared data on target accounts and prospects” as their top alignment challenge, with that concern tying for first place with communication issues.

The 43 percent who identified a gap in credible data in 2018 is up from just 27 percent in 2016, signaling a growing chasm that keeps sales and marketing teams from working together effectively.

In addition to using different technologies, confirmation bias also comes into play when everyone is under increased pressure to demonstrate their contributions to the company’s revenue stream.

Like political partisans who disbelieve objective truth in favor of “alternative facts,” marketers may be tempted to cherry-pick data that paints their performance in the best possible light. This contributes to the disconnect between sales and marketing, and if marketing executives can’t credibly identify their place in the value creation chain, it harms their credibility and denies them a seat at the strategy table.

In addition to decreasing credibility with colleagues, the use of siloed data makes it harder for marketing and sales teams to collaborate, and that is a significant problem because buyer behavior has evolved in the digital age.

There are typically more people involved in B2B purchasing decisions, and customers are making critical decisions earlier in the buying process — often before they’re even on the sales team’s radar.

A 2017 Harvard Business Review article notes that the number of buyers involved in a B2B purchase has risen from an average of 5.4 in 2015 to 6.8 just two years later.

Ironically, although buyers have access to more data than ever before, they feel increasingly stressed by the onslaught of information. And, since the expanded circle of buying decision-makers comes from a diverse collection of geographies and functional roles, the groups tend to be more cautious, which can lengthen sales cycles.

But even with a longer sales cycle, B2B buyers make critical decisions early in the process, often while the people conducting the research remain completely anonymous. A Demand Gen Report B2B Buyer Survey conducted in 2018 found that 41 percent of buyers conducted research anonymously in the first 90 days of the buying cycle and that most of them made critical decisions during that time period. 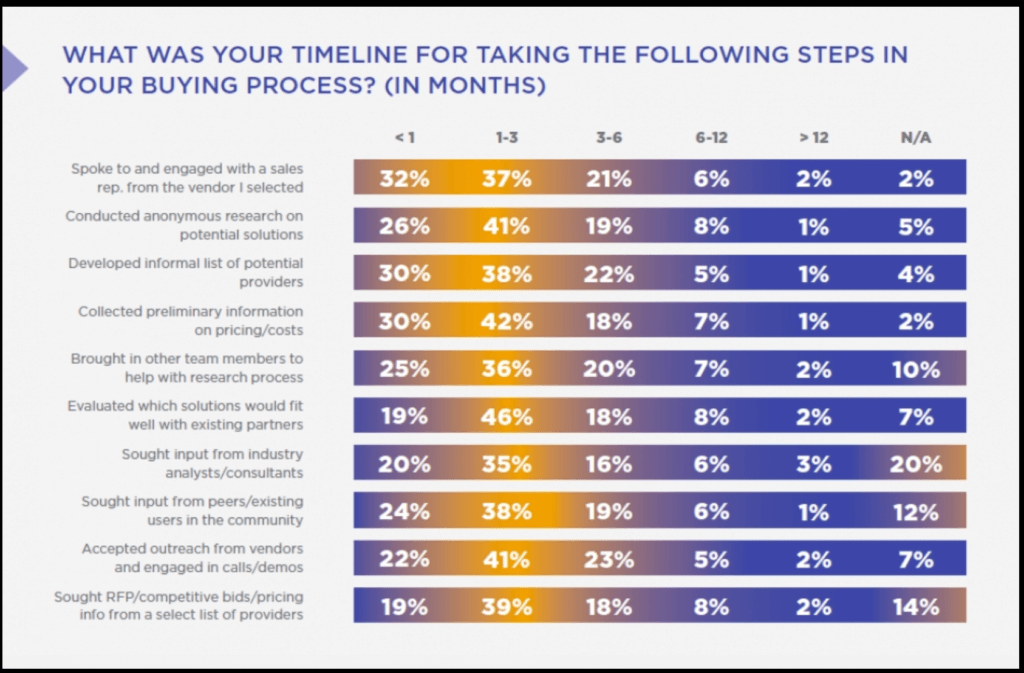 According to DemandGen, the B2B buying journey make extend to 12 months, but the most important decisions are made in the first 90 days.

With buyers making important decisions earlier in the sales cycle, it’s more important than ever for sales and marketing to work closely together so they can provide information appropriate to the prospect’s stage in the customer journey.

And for marketers, it’s crucial to be able to attribute revenue to upstream marketing efforts, capturing what worked and what didn’t when buyers are still anonymous.

Toward a Single Source of Truth

So, how can sales and marketing get on the same page and avoid the fake news effect? One under-appreciated cause of the disconnect is the lack of a single source of data truth. And the root cause of that gap is that the two teams use separate technology solution stacks that generate siloed data.

The good news is that it’s relatively simple to bring the teams together around a single source of data truth.

At most B2B companies, the CRM system functions as the de facto revenue record. Numbers generated on platforms like Salesforce are credible with the sales team, the C-suite and the board. CRM captures all the data that is the customer lifecycle, including purchases, renewals, support tickets, sales team commissions, products used, product training tracking, etc.

Rather than pulling CRM data into marketing tools for reporting, marketers should push marketing touches into the CRM system, where the information will combine with all other customer lifecycle data, thereby creating one view of the truth.

Marketing technology that is fully integrated with the CRM system can allow marketing and sales to collaborate at every stage of the marketing and sales funnel from top to bottom, identifying which campaigns work and attributing revenue accurately, bolstering confidence in attribution models. This level of integration improves transparency and honesty across marketing and sales organizations.

With numbers that everyone trusts, marketers can identify how their upstream activities result in transactions, using technology to link anonymous research conducted by prospects early in the customer journey to qualified leads and revenue recorded in the CRM system. Marketing can finally show how activities like trade shows produce more than just clicks and downloads.

The “fake news” effect stems in part from the increasing demand to prove that marketing campaigns generate revenue — or face job loss and budget cuts in the absence of credible performance data. In this scenario, marketers favor the platform that provides the best-looking data instead of the accurate technology that shows what’s actually leading to sales and revenue growth. This leads to siloed data and a loss of credibility.

Another example of “fake news” happens when marketers are unable to articulate the value of influence campaigns or attribute revenue to multiple touches.

Too many organizations look solely at the last touch, which validates only the last program run before the prospect agrees to take a meeting. That omission inadvertently discounts 33-66 percent of the digital journey and related investment!

The divide between marketing and sales may not be as deep as the current political divide, but the effect is similar. Each group believes its own data, and each is biased toward performance indicators that put their own activities in the best possible light. This approach isn’t conducive to a functioning democracy, and it isn’t effective for managing a growing organization either.

Marketing executives can keep these “alternative facts” out of the mix so they can optimize marketing spend for greater impact on the bottom line.

The key is to adopt the CRM system as a core part of the marketing technology solution stack, integrating numbers from every martech tool into the CRM system. That’s how to beat the fake news effect — and fully align the sales and marketing teams to succeed in a fast-moving, data-driven business environment.